If you want to give your dog a vintage, classy name, you've come to right place. These are the best old-fashioned dog names you'll find online.

Our guide to the best old fashioned dog names

Old fashioned names are roaring back into fashion for today’s baby humans. And while you might be hesitant to name a kid after your great-grandma, there’s certainly less pressure when it comes to a dog. Giving your dog an old fashioned dog name can be extremely charming. After all, these names stood the test of time for a reason, right?

If you want something vintage, you’re bound to have found a few winners in the list above. But we'll share some of our favorites to help you narrow it down.

For male dogs, we love Mason as a name that’s oldskool and handsome, but still unique enough to let your boy stand out from the pack. For something more common and ultra classic, you can’t help but love Toby.

If you want an old fashioned dog name with a bit of edge, Buster is another great one – especially for little guys with big personalities.

For female dogs, Beatrice is a bold pick with a striking vintage feel. Although it’s a bit of a mouthful, the opportunity to give your girl the cute nickname of Bea makes it all worthwhile.

Safer options, particularly for smaller dogs, would be Dixie or Daisy. And if you want a classic name for a girl of any breed or size, Roxy and Ruby make fantastic choices.

As of May 2022, old fashioned dog names seem increasingly popular with new puppy owners. Our stats show that they are more fashionable than they were six months ago.

Daisy is the most popular name, having received more likes than any other in this list of old fashioned dog names.

A pup lover from Hesse, Germany 🇩🇪 browsed a list of Mythical Dog Names.
less than a minute ago
Someone from Minnesota, United States 🇺🇸 searched for Wesley.
1 minute ago

A dog whisperer from Washington, United States 🇺🇸 browsed a list of Mastador Names.
1 minute ago 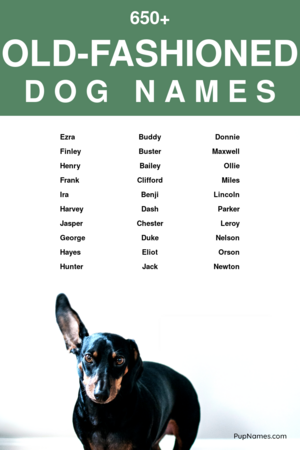 Let us know what you think of these old fashioned dog names!