Does your new pup love to play? Why not name your puppy after their playful nature. Here are the most playful puppy names to choose from.

Staying on the playful theme, these names mean lively or are in some way related to the word.

Snatching food from the counter and trawling through garbage are some of the delights you can look forward to as a dog owner. Embrace their naughtiness with these mischievous dog names.

While some dogs are more playful than others, it’s fair to say most of them possess a frisky, fun-loving side. Sometimes this wanes after puppyhood – but not always. When it’s clear that you’ve adopted a pup with a lively zest for life, it seems fitting to recognize their infectious energy by giving them a playful name.

Whether you’ve got a dopey Retriever or a bright-eyed Pomerianian, we’ve picked out some playful names for dogs that are sure to fit the bill. These names are great for people who don’t take themselves too seriously – and are keen to acknowledge the fun side of owning a dog!

For male dogs, let’s get the glitter ball rolling with Disco. This name just screams joy, and hints at a dog that’s always on the move. It works for both large and small breeds, on one condition – that there are only good vibes to be shared!

Another good option for boys would be Scooter. There’s something zippy and energetic about this name, and we particularly adore the connection it has to childhood toys. For something short and snappy, Chase also works well for boy dogs. It calls out one of the oldest and most primal games that dogs play with each other.

For female dogs, we love the innocent energy of the name Roxie – and it’s versatile enough to work for dogs of all shapes and sizes. Another name for girls with a similar level of playfulness is Mitzi, which works particularly well with small breeds like Chihuahuas and Dachshunds.

For something more elegant, we really love Jet as a playful name for girl dogs. Historically, it has been a shortened form of the name Henriette, meaning “home ruler”. But it also makes us think of a jet engine, soaring above the clouds, alluding perfectly to the adventurous nature of your playful pup!

As of January 2023, playful dog names seem increasingly popular with new puppy owners. Our stats show that they are more fashionable than they were six months ago.

Someone from Virginia, United States 🇺🇸 browsed a list of Energetic Dog Names.
less than a minute ago

A dog whisperer from British Columbia, Canada 🇨🇦 browsed a list of Cool Dog Names.
less than a minute ago

Someone from Mexico City, Mexico 🇲🇽 browsed a list of Badass Dog Names.
1 minute ago 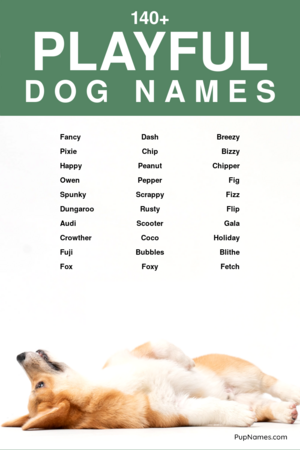 Let us know what you think of these playful dog names!