Curiosity is a trait that's common in young puppies, and it can be very cute to name your dog after this childike wonder. There are some great names for nosey pups in this list.

As of January 2023, curious dog names are trending down with new puppy owners. Our stats suggest that they are less fashionable than they were six months ago.

Someone from California, United States 🇺🇸 browsed a list of Irish Dog Names.
less than a minute ago

Someone from New York, United States 🇺🇸 browsed a list of Roman Dog Names.
less than a minute ago
Someone from North West, Singapore 🇸🇬 searched for Ida.
1 minute ago

A pup lover from Virginia, United States 🇺🇸 browsed a list of Bordoodle Names.
2 minutes ago 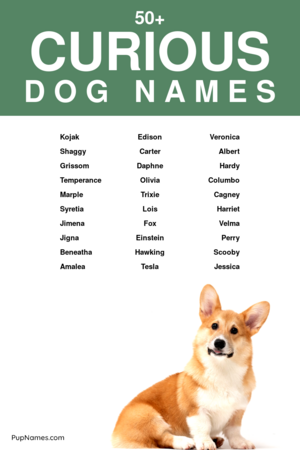 Let us know what you think of these curious dog names!