Our guide to the best independent dog names

If you’re looking for a dog name that expresses independence, it’s probably because you see your dog as a free-thinker. Some people want lap dogs, but you’re just happy for your pup to explore the world, however it may choose to do so.

These strong, independent dog names will serve your dog well long after puppyhood. To make it a bit easier for you to decide, here are our picks.

For male dogs, we think Ranger is a powerful, authoritative name that represents a dog who was born to find his own way. If you want an edgier pick with a cultural flair, you could opt for Marco, after the famous Venetian explorer Marco Polo, who travelled along Asia’s silk road in the 13th century.

For something a little more on the spiritual side, we also love the idea of naming a boy Spirit.

For female dogs, you could go really direct and name her Liberty. This word means freedom, and it gives you the opportunity to call your girl Libby as a cute nickname. Tori is also an adorable name for a dog. Short for Victoria, it shares the same powerful meaning – the goddess of victory.

Alma, meaning ‘soul’ in Spanish, is another sweet name for an independent girl dog.

As of May 2022, independent dog names seem increasingly popular with new puppy owners. Our stats show that they are more fashionable than they were six months ago.

Bella is the most popular name, having received more likes than any other in this list of independent dog names.

A dog whisperer from Washington, United States 🇺🇸 browsed a list of Samoyed Names.
less than a minute ago

A dog whisperer from Washington, United States 🇺🇸 browsed a list of Cockapoo Names.
less than a minute ago

Someone from California, United States 🇺🇸 browsed a list of Nerdy Dog Names.
1 minute ago 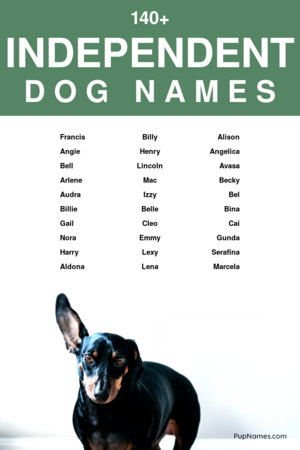 Let us know what you think of these independent dog names!