Staying on the spiritual theme, these names mean spirit or are in some way related to the word.

Staying on the spiritual theme, these names mean blessed or are in some way related to the word.

Yoga brings us inner peace, exercise and healing of the mind. Give your dog a sense of zen by choosing one of these beautiful and spiritual yoga-inspired dog names.

Sanskrit is the sacred language of Hinduism. These gorgeous Sanskrit dog names will be a hit with the spiritually awoken dog owners among us.

Show your Christian faith by choosing a biblical name for your dog. These biblical dog names are truly divine!

Spiritualism is on the rise. More and more young people are looking within themselves to become more self-aware, or “awoken”. And because the principles and symbols of spiritualism are so closely tied to nature, it’s easy to see how spiritual references would make great dog names.

Giving your dog a spiritual name creates a level of significance that goes beyond its appearance or its connection to you as its owner. Spiritual dog names set your pup up for life, as opposed to a cutesy name that both you and your dog could eventually outgrow.

For male dogs, we love the simplicity and tribal feel of Chant. If you like that, you might also like Mantra, which is two-syllable and clearer in sound, but also refers to tribal singing.

Another option we really like for male dogs is Cosmo, which is a popular choice for good reason. The name refers to the universe as a whole, focusing on order, harmony and beauty.

For female dogs, our favorite is Yana. This is a beautiful two-syllable option that fits all of the criteria for a good dog name. It refers to a Buddhist spiritual practice, or a “way of enlightenment”.

Other great choices for girls are Shaina, which is Hebrew for beautiful, or the similar-sounding and slightly more common Shiva.

As of January 2023, spiritual dog names are trending down with new puppy owners. Our stats suggest that they are less fashionable than they were six months ago.

Someone from District of Columbia, United States 🇺🇸 browsed a list of Golden Retriever Names.
1 minute ago

Someone from Illinois, United States 🇺🇸 browsed a list of Greek Dog Names.
1 minute ago 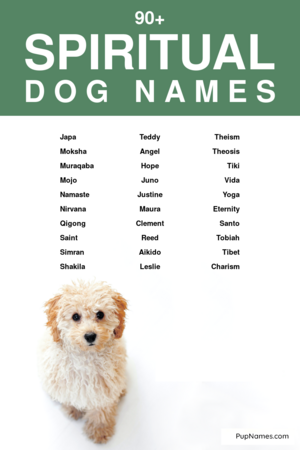 🇨🇦
Marie (Quebec, Canada)
Beautiful names! I am strongly considering calling my puppy Yana or maybe Luna! They are both so pretty!
December 28, 2021

🇺🇸
Alana (Denver)
This is a very good list thank you! I am getting my German shepherd puppy next week and I am so excited
November 14, 2021

Let us know what you think of these spiritual dog names!