The creator of the whole universe, hindu

Traits associated with the name Brahma:

Dogs named Brahma tend to be strong-willed, loyal, and loving. This name is also associated with companionship, and empathy.

Is Brahma a good dog name?

Brahma has two syllables, which is highly recommended by dog trainers. The name also ends in a vowel sound, so it's easy for dogs to recognize. Brahma isn't one of the most common names, so your dog will certainly stand out. If you love the name, you should pick it!

Brahma is found in these categories:

Brahma is not a popular dog name. That's great if you like to stand out from the crowd!

Get special treats for Brahma! 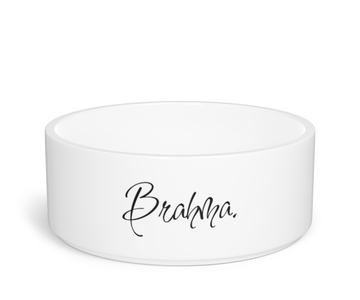 Bodhi
Sanskrit for 'awakening
Bailey
Courtyard within castle walls; steward or public official.
Brownie
A legendary good-natured elf that performs helpful services at night. Also a small square of rich chocolate cake.
Bubba
Nickname for a boy in the south of the US; a slow moving individual.
Buddy
Companion, partner; perhaps a version of the word "brother".
Banjo
Banjo
See more...

Got a dog named Brahma?

Let us know what you think of Brahma as a dog name!