Shamelessly promote your geeky nature by naming your dog after something far out of the mainstream. Here are some of the finest nerdy dog names you'll find on the interplanetary network.

As of January 2023, nerdy dog names are trending down with new puppy owners. Our stats suggest that they are less fashionable than they were six months ago.

A pup lover from Missouri, United States 🇺🇸 browsed a list of Croatian Sheepdog Names.
less than a minute ago

Someone from Virginia, United States 🇺🇸 browsed a list of Dog Names Starting With M.
1 minute ago 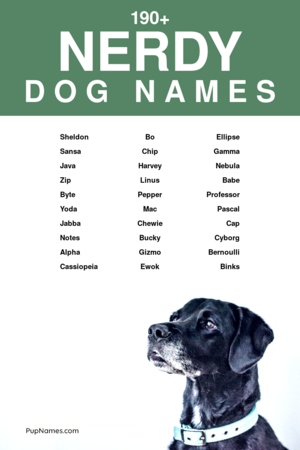 Let us know what you think of these nerdy dog names!