Naming your dog something hilarious is bound to stick in people's minds. For those who don't like to take life too seriously, here are some funny dog names for you to choose from.

One of the most fun aspects of naming a dog is picking out something unique and peculiar. These quirky dog names will help you and your new puppy to stand out.

Naming a dog is an opportunity to have fun, and these cheeky dog names are a great way to do it. They're guaranteed to get a smile from everyone your pup meets.

As of January 2023, funny dog names are trending down with new puppy owners. Our stats suggest that they are less fashionable than they were six months ago.

Someone from North West, Singapore 🇸🇬 searched for Christmas.
less than a minute ago

A dog whisperer from California, United States 🇺🇸 browsed a list of Big Dog Names.
less than a minute ago

Someone from Virginia, United States 🇺🇸 browsed a list of Playful Dog Names.
1 minute ago

Someone from Provincia de Pichincha, Ecuador 🇪🇨 browsed a list of Dog Names Starting With K.
1 minute ago

Someone from District of Columbia, United States 🇺🇸 browsed a list of Dog Names Starting With K.
2 minutes ago 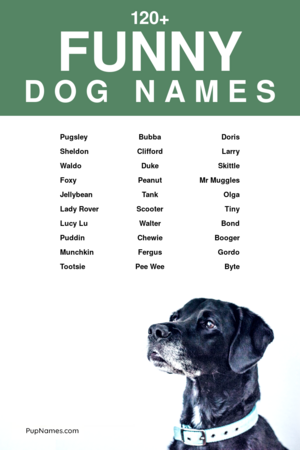 Let us know what you think of these funny dog names!