If you've got a bouncy or hyperactive dog, these energetic dog names will help you represent your dog's boundless energy and zest for life.

Staying on the energetic theme, these names mean rapid or are in some way related to the word.

Planning to raise a lean machine? If you have an active breed, these athletic dog names will help to represent their speed, agility and zest for life.

Bring some extra joy and energy to your family by naming your dog with one of these lively dog names. Made for bright, active and energetic pups of all shapes and sizes.

People talk about “having the zoomies” as if it’s a brief blitz of energy that a dog exerts once dinner has been demolished. But some dogs are just naturally rambunctious to the point that they spend most of the day zooming. And this relentless energy is often what makes larger, sporty breeds so much fun to adopt.

If you’re adopting a pup that just never slows down, what better way to represent their zest for life than with an energetic name? The list above draws upon concepts like speed, athleticism and the natural world to offer some fantastic monikers for your spritely dog.

For male dogs, there’s just so much to love about Pronto. It’s a masculine sounding name that conveys the sense of urgency your boy has to explore the world – and because it’s a Spanish word, it carries a nice exotic twist as well. We also love Bullet, which brings a touch of menace to your crazy canine.

For a more classic name that represents power and energy, why not run with Turbo? It’s a cute name for boys that perfectly represents the way your dog’s energy level is always cranked up to the max.

For female dogs, our first recommendation would be the Spanish-infuenced Chispa. This cute name means a small particle of glowing matter, which does a lot to represent the energy level of a small but mighty dog. Sparkles is, perhaps, the more traditional English equivalent of this name, and works great for energetic girls too.

If you want to stand out from the crowd, another exotic name meaning speed is the French-influenced Vitesse. Although it might sound like a weird name for a dog at first, it shortens beautifully to Tess, which not only gives your girl a much-loved nickname, but also an extra layer of meaning.

As of January 2023, energetic dog names are trending down with new puppy owners. Our stats suggest that they are less fashionable than they were six months ago.

A pup lover from Washington, United States 🇺🇸 browsed a list of Korean Jindo Dog Names.
less than a minute ago

A pup lover from Washington, United States 🇺🇸 browsed a list of Whippet Names.
1 minute ago

A dog whisperer from Washington, United States 🇺🇸 browsed a list of Sloughi Names.
1 minute ago 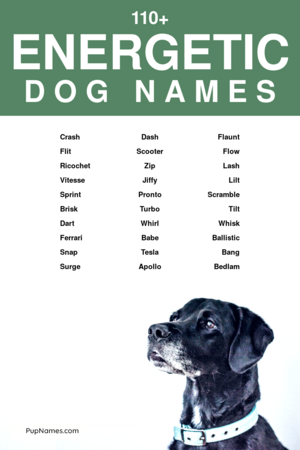 Let us know what you think of these energetic dog names!