Nature names just fit dogs like a glove, whatever the size and breed. Acknowledge dogs' place in our world by choosing one of these beautiful dog names inspired by nature.

Staying on the nature theme, these names mean mountain or are in some way related to the word.

Staying on the nature theme, these names mean river or are in some way related to the word.

Staying on the nature theme, these names mean forest or are in some way related to the word.

Dog names inspired by flowers are appropriate for all kinds of dogs, big and small. If you love nature and flowers, here are some flower dog names to help you choose.

The ocean brings calming and healing energy to all of us, including dogs. Show your love for surf, beach and the sea by giving your dog one of these ocean dog names.

There's something incredibly lovable about the irony of naming your dog after a different animal. These cute animal dog names are guaranteed to get laughs and smiles.

Dogs and nature are so intrinsically linked for many of us. Perhaps our love for nature brought us to dogs, or our love for dogs brought us closer to nature. In either case, there’s no question that nature-inspired names just seem to fit dogs like a glove.

Lakes, forests, mountains and valleys all provide beautiful feelings of serenity and belonging. And dogs seem to be happiest in these environments too. That’s why so many dog owners choose to give nature names to their pups. These names remind us of the primal innocence of a dog, uncorrupted by modern society. So if you’re on the hunt for some stunning nature dog names, you’ll love our pick of the bunch!

For male dogs, it’s easy to see why Basil has been rising in popularity recently. Elegant, old-fashioned with a nice touch of fun, this name brings a leafy, organic vibe to your pup, and still manages to fly under the radar.

We also think Bramble is a cute name for boys, referring to the tasty berries that can be eaten straight from the branch when they’re ripe. And for something a little outside-of-the-box, we think Summit makes a majestic name for a boy dog. Given to a Husky, Mountain Dog or Akita, this name really positions your pup as the king of the rock in any dog pack!

For female dogs, it’s easy to see why Willow has become such a firm favorite within our community. With a soft, elegant sound, it sets your girl up to become a sweet and submissive pup. Staying on the floral theme, we also love Clover for girls. Not only does this name sound elegant, we believe it brings a nice Irish twist and (hopefully) some good luck!

And it might sound simple, but another top recommendation for female dogs is River. This beautiful name is uncommon enough to let your dog stand out from the crowd, but still evokes powerful images and sounds of bubbling brooks and roaring waterfalls.

As of February 2023, nature dog names seem increasingly popular with new puppy owners. Our stats show that they are more fashionable than they were six months ago.

Someone from Virginia, United States 🇺🇸 browsed a list of Disney Dog Names.
less than a minute ago

A dog whisperer from Virginia, United States 🇺🇸 browsed a list of Belgian Sheepdog Names.
less than a minute ago

A dog whisperer from Virginia, United States 🇺🇸 browsed a list of Dog Names Starting With K.
1 minute ago

Someone from Provincia del Guayas, Ecuador 🇪🇨 browsed a list of Poodle Names.
1 minute ago 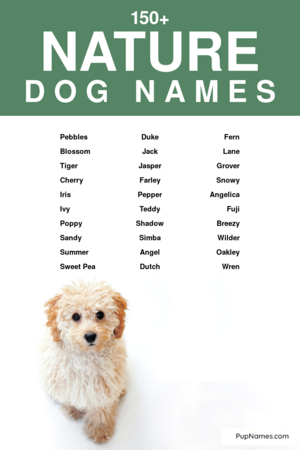 🇺🇸
Hello (North Carolina, United States)
I like the name I have for my dog
February 01, 2022

Let us know what you think of these nature dog names!