Dogs named Teddy tend to be good-natured, loyal, affectionate, and loving. This name is also associated with intelligence, and companionship.

Teddy has two syllables, which is highly recommended by dog trainers. The name also ends in a vowel sound, so it's easy for dogs to recognize. Teddy is a widely loved dog name for good reason. If you like it, go for it!

Teddy is found in these categories:

As you can see, Teddy is one of the world's most popular dog names.

Get special treats for Teddy! 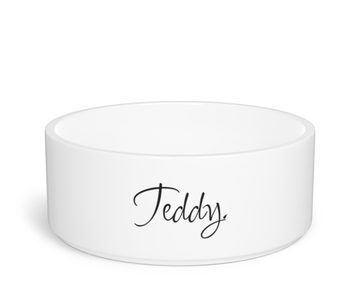 Got a dog named Teddy?

🇺🇸
Johnny (North Carolina, United States)
I left my dog Teddy outside and when he came in it sounded like under his breath that he said " You left me out there I was terrified." and that's not the first time that that happened where it sounded like he talked
June 06, 2022

🇺🇸
Anonymous (Colorado, United States)
Teddy is my dog's name, and he IS good-natured, loyal, affectionate, loving, and intelligent. He is also a great companion to have around. In fact, he's laying next to me right now! And when I got up to do something, he yawned, got up, and followed me! I love this name and it matches my adorable dog.
June 01, 2022

Let us know what you think of Teddy as a dog name!