Loyalty is one of the most beautiful and admirable dog traits. Establish a close bond with your dog by giving your dog one of these loyal names.

Staying on the loyal theme, these names mean friend or are in some way related to the word.

They say a dog is for life, not just for Christmas. Once you adopt one, you'll understand. These devoted dog names represent unconditional love, loyalty and forgiveness.

An obedient dog is what everyone hopes to raise, but it's never an easy task. The least you can do is give your dog one of these obedient dog names to get it on the right track.

As of September 2022, loyal dog names seem increasingly popular with new puppy owners. Our stats show that they are more fashionable than they were six months ago.

Mimi is the most popular name, having received more likes than any other in this list of loyal dog names. 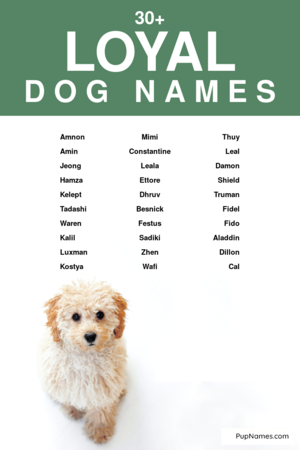 🇺🇸
Anna (Alabama, United States)
RESCUER- I try to give them a name that matches their personality. I want them to have a confident & strong name. Some have been in horrible places, neglected * abused.
August 23, 2022

Let us know what you think of these loyal dog names!