Show your 'je ne sais quoi' with these fancy French dog names. Everything sounds more romantic in French, so why not give your pup a snazzy European twist?

Our guide to the best french dog names

French culture is loved around the world, mostly for its distinct influence on art and fashion. So if you're a bit of a fashionista or you just want to make a statement, French dog names will have irresistable appeal.

Even if you're not about art or fashion, the French language just has a beautiful sense of romance to it that seems to make everything sound better. Giving your dog a French name allows you to hit that sweet spot between cute, fancy and a good dose of fun.

For male dogs, we have to start with the classic Beau. It's quite a common dog name, but for good reason, meaning 'handsome' in French and managing to be a versatile name that works for both small and big pups. If you like the trend of giving dogs people's names, we really recommend the names Louis and Leon. The latter works particularly well for large breeds, because it means 'lion' and represents bravery. For a pop culture take, why not go with Milou? It's the original French name of the dog from the classic comic book series Tintin.

For female dogs, you can give a great ode to French fashion by naming your dog Coco or Chanel. If you want a more understated French name, we recommend Sylvie or Sophie, which are both laid-back names that work just as well for dogs as they do for people. For pups on the smaller side, you can run with Fifi which is a cute shortened form of the name Josephine.

As of May 2022, french dog names seem increasingly popular with new puppy owners. Our stats show that they are more fashionable than they were six months ago.

Coco is the most popular name, having received more likes than any other in this list of french dog names.

A pup lover from Auckland, New Zealand 🇳🇿 browsed a list of Nerdy Dog Names.
less than a minute ago

A pup lover from Central Singapore, Singapore 🇸🇬 browsed a list of Rottweiler Names.
4 minutes ago

A dog whisperer from Virginia, United States 🇺🇸 browsed a list of Dog Names Starting With V.
4 minutes ago 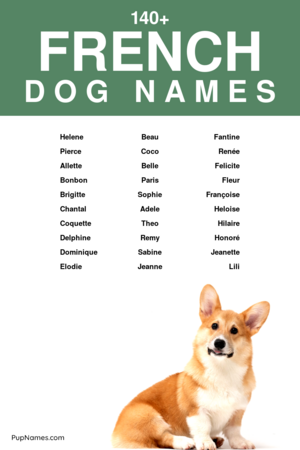 Let us know what you think of these french dog names!