Got a hunting dog, like a retriever or a foxhound? These fantastic hunting dog names will keep your dog in touch with its primal predatory nature.

Staying on the hunting theme, these names mean hunter or are in some way related to the word.

Some dogs just love having a job to do, and that's what makes them so adorable. Give your stick-carrying champ one of these fantastic working dog names.

You can't tame a dog's herding instinct, so why not embrace it by giving your puppy one of these herding dog names? Perfect for sheepdogs, corgis and cattle dogs.

As of January 2023, hunting dog names seem increasingly popular with new puppy owners. Our stats show that they are more fashionable than they were six months ago.

A pup lover from Mexico City, Mexico 🇲🇽 browsed a list of Spiritual Dog Names.
1 minute ago
Someone from North West, Singapore 🇸🇬 searched for Hardy.
1 minute ago

A pup lover from Washington, United States 🇺🇸 browsed a list of Whippet Names.
1 minute ago 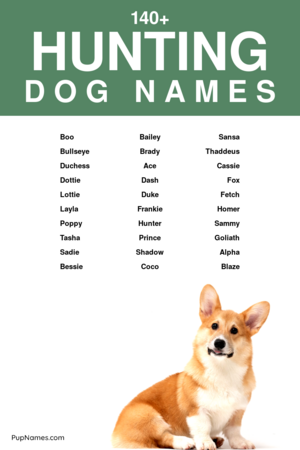 Let us know what you think of these hunting dog names!