A mountain nymph in Greek mythology.

Traits associated with the name Echo:

Dogs named Echo tend to be loyal, affectionate, loving, and brave. This name is also associated with intelligence, and companionship.

Is Echo a good dog name?

Echo has two syllables, which is highly recommended by dog trainers. The name also ends in a vowel sound, so it's easy for dogs to recognize. Echo is a widely loved dog name for good reason. If you like it, go for it!

Echo is found in these categories:

Echo is one of the more popular dog names out there. According to our data, Echo outranks the great majority of names.

Get special treats for Echo! 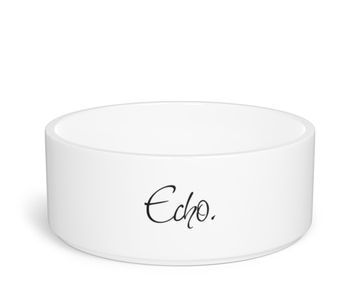 Rocky
Inspired by Rocky Balboa.
Midnight
12:00 AM
Atlas
A titan condemned to hold up the celestial heavens for eternity in Greek mythology. It means "to carry".
Blaze
Bright and shiny.
Duke
Leader, commander, governor of a province
Ezra
Helper
See more...

Got a dog named Echo?

🇺🇸
Rhiannon (Iowa, United States)
Just picked out our puppy & decided Echo! I am an echocardiographer, and my boyfriend is a 91E (Echo phonetically) in the army! It's perfect for our new addition!
January 08, 2022

🇺🇸
Rachael (Rhode Island, United States)
I Love the name Echo Just name my 8wk old Shihtzu He was born on the same day my 18yr old Shihtzu passed He is an Echo of him💙
December 30, 2021

Let us know what you think of Echo as a dog name!