These celestial dog names are for true deep thinkers. The universe is vast and wonderful, so why not name your dog something celestial or cosmic?

Staying on the celestial theme, these names mean sky or are in some way related to the word.

Staying on the celestial theme, these names mean star or are in some way related to the word.

Little inspires greater feelings of wonder and marvel than the cosmos. And when it seems like nothing on Earth could possibly represent the magic of the connection between you and your dog, it’s time to look to the skies above.

Celestial dog names include beautiful references to astronomy, constellations, the solar system, moons, the heavens, and beyond. If you’re the type of person whose head is usually in the sky, or you’re just fascinated by space and astronomy, you can really help your pup to stand out from the crowd by choosing one of these stunning cosmic names. From the stratosphere to deep space, there are so many names that we love in this list.

We think Astro is another great name that works for boys of all sizes and breeds, and encapsulates everything about the stars in one name. For something out-of-the-box, you could also go with Eclipse which inherently represents a very rare and spectacular beauty. The name works particularly well for black and white dogs, or dogs with patches.

If you’ve got a girl dog, you really can’t go wrong with Luna. The name means ‘moon’ in Spanish, and is quickly becoming one of the world’s most loved female dog names.

For something more unique, we think Aquila is a beautiful name that we’ve never come across before. Meaning “eagle”, this name gives your girl a majestic and high-flying moniker that represents both beauty and dominance. Another unconventional choice would be Aura, which is a gorgeous celestial name for girls. It might not be the most recognizable dog name, but it’s certainly a special one.

As of January 2023, celestial dog names seem increasingly popular with new puppy owners. Our stats show that they are more fashionable than they were six months ago. 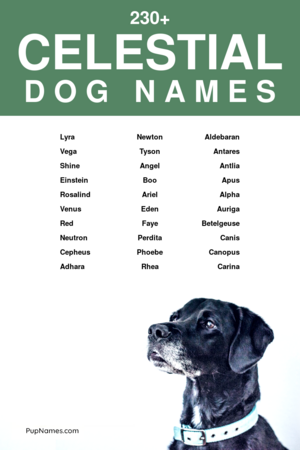 Let us know what you think of these celestial dog names!