Glow or emit light, the take a fancy to or a practical joke such as monkey shines.

Dogs named Shine tend to be good-natured, loyal, loving, and resilient. This name is also associated with friendship, and companionship.

Shine is a one-syllable dog name, making it short and snappy. The name also ends in a vowel sound, so it's easy for dogs to recognize. Shine isn't one of the most common names, so your dog will certainly stand out. If you love the name, you should pick it!

Shine is found in these categories:

Shine is not a popular dog name. That's great if you like to stand out from the crowd!

Get special treats for Shine! 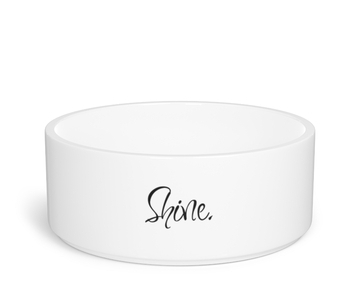 Sky
Atmosphere Seen From Earth
Space
(printing) a block of type without a raised letter; used for spacing between words or sentences
Scooby
A famous cartoon canine sleuth
Scrappy
full of fighting spirit
Skip
To move in a light springy manner. to escape secretly in haste.
Snoopy
offensively curious or inquisitive
See more...

Got a dog named Shine?

Let us know what you think of Shine as a dog name!