Got an intelligent breed or just an all-out smarty pants for a dog? Name them something smart to reflect their dazzling intelligence.

Staying on the intelligent theme, these names mean intelligence or are in some way related to the word.

Dogs always find a way to get what they want, even through the most industrious methods. Give your pup one of these crafty dog names as a tribute to their clever ways.

Dogs are pretty damn smart. It’s one thing to learn a wide variety of tasks and commands, and understand human communication. But dogs excel over other species in the way they’re able to understand and interpret human emotions, and even assist people with disabilities.

Studies have shown that dogs have cognitive abilities similar to those of a 2-year-old child, and some breeds are considered to be more intelligent than others. One of the most magical things about having a dog is just marveling at their intelligence. And if you have a Golden Retriever, Border Collie or another smartass breed, one of these intelligent dog names might be just too good to resist.

For boys, Albert is a great place to start. Human names are fashionable for dogs at the moment, and this one blends traditional charm with scientific significance. It, of course, refers to the great Albert Einstein, the famous German scientist who was believed to have an IQ of around 160! Another old-fashioned name that works so well for boys dogs is Watson. It’s a cute homage to Sherlock Holmes’ intelligent sidekick, and works for dogs of all shapes and sizes.

If you want something a bit more unusual, we really like Rubik. It refers to one of the smartest toys out there – the Rubik’s cube.

For female dogs, we think Curie is an adorable name for a pup, and is inspired by the first woman ever to win a Nobel Prize, Marie Curie.

If mythology appeals to you, why not name your girl after the Roman goddess of wisdom, Minerva? It might sound like a mouthful at first, but you get the opportunity to give your pup a nickname – Minnie! And finally, if you’d prefer something a bit more exotic, Sana is a beautiful female name that means “brilliance and intelligence”.

As of January 2023, intelligent dog names are trending down with new puppy owners. Our stats suggest that they are less fashionable than they were six months ago.

A dog whisperer from California, United States 🇺🇸 browsed a list of Kyi Leo Names.
less than a minute ago

Someone from California, United States 🇺🇸 browsed a list of Soft Coated Wheaten Terrier Names.
less than a minute ago

Someone from California, United States 🇺🇸 browsed a list of Soft Coated Wheaten Terrier Names.
less than a minute ago

A dog whisperer from Texas, United States 🇺🇸 browsed a list of Soft Coated Wheaten Terrier Names.
less than a minute ago

Someone from California, United States 🇺🇸 browsed a list of French Dog Names.
less than a minute ago 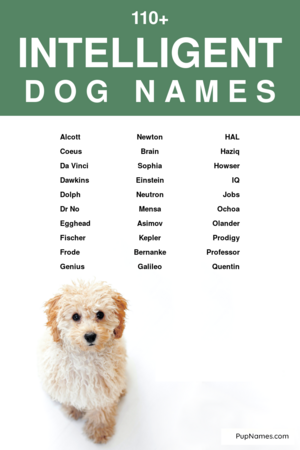 🇺🇸
Elah (Oregon, United States)
My older half sisters new service dog in training is part pitbull and she's still just a puppy she adopted her from the humanes society and man she reminds me a lot of my older half sisters senior pitbull mix who was never a service dog but was always a total sweetheart as well but unfortunately old age got to her and she also got an untreatable brain tumor wich caused her to loose her eyesight and bump into everything and everyone and go potty every couple of minutes with her owners assistance thankfully we got to say our goodbyes the day before she went to the vet to be put down ironically the night before she went to the vet to be put down i actually had a nightmare where she went to the vet to be put down it's literally like my own nightmare predicted what was going to happen in the morning our dreams can be so cruel... except my dreams are cruel to me all the time all my dreams are nightmares i never have good dreams ever and it's not even my fault! my nightmares also cause me to have seizures i only have them when i dream but i am seeing a doctor about that though.
November 29, 2022

Let us know what you think of these intelligent dog names!