The goddess of war, strategy and wisdom in roman mythology

Traits associated with the name Athena:

Dogs named Athena tend to be strong-willed, loyal, loving, and brave. This feminine name is also associated with intelligence, and companionship.

Is Athena a good dog name?

Athena has more syllables than most dog names, but you can easily give your pup a nickname to shorten things. The name also ends in a vowel sound, so it's easy for dogs to recognize. Athena is a widely loved dog name for good reason. If you like it, go for it!

Athena is found in these categories:

Athena is one of the more popular dog names out there. According to our data, Athena outranks the great majority of names.

Get special treats for Athena! 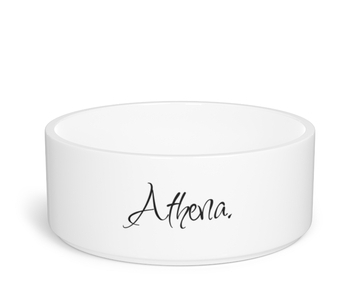 Ambrosia
Immortal; the food or drink of the Olympian gods
Amelia
Woman to fly across atlantic ocean.
Xena
A warrior princess in greek mythology.
Aphrodite
The goddess of love, goddess of love and beauty and daughter of zeus in ancient mythology; identified with roman venus, beauty, and fertility in greek mythology
Akilli
Smart in Turkish.
Arya
Melody
See more...

Got a dog named Athena?

🇺🇸
Tom (Tennessee, United States)
Athena is in the Greek pantheon of god's, not Roman. The corresponding Roman goddess to Athena is actually Minerva.
April 25, 2022

Let us know what you think of Athena as a dog name!