Move over, cutie pies. If you're here, it's because you want to give your dog a strong, powerful, badass name. Enjoy this huge selection of truly badass dog names.

Staying on the badass theme, these names mean warrior or are in some way related to the word.

Staying on the badass theme, these names mean leader or are in some way related to the word.

Staying on the badass theme, these names mean bold or are in some way related to the word.

If your dog is a natural born leader, you'll want to pay tribute to that with one of these dominant dog names. Perfect for large, commanding, powerful pups.

As sastifying as it is to train a dog, you have to love their wild side. Pay tribute to your dog's challenging nature with these plucky, rebellious dog names.

As of January 2023, badass dog names seem increasingly popular with new puppy owners. Our stats show that they are more fashionable than they were six months ago.

Someone from North West, Singapore 🇸🇬 searched for Leala.
1 minute ago 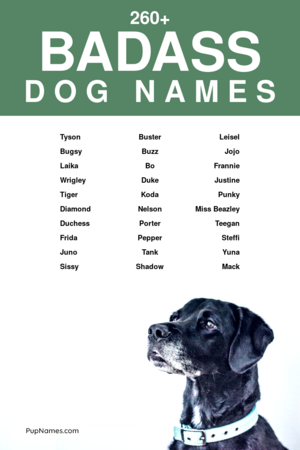 Let us know what you think of these badass dog names!