If you're adopting a hard nut, try these tough dog names on for size. They're perfect for larger breeds or just dogs with a dominant personality.

Staying on the tough theme, these names mean warrior or are in some way related to the word.

Staying on the tough theme, these names mean fighter or are in some way related to the word.

Staying on the tough theme, these names mean brave or are in some way related to the word.

Is your dog going to grow up to the bully of the dog park? If you want a menacing name that strikes fear into smaller puppies, try these mean dog names on for size.

Brave dogs offer the best companionship, because they have the confidence to support and protect you. These courageous dog names are a tribute to strong-willed dogs.

As of January 2023, tough dog names are trending down with new puppy owners. Our stats suggest that they are less fashionable than they were six months ago. 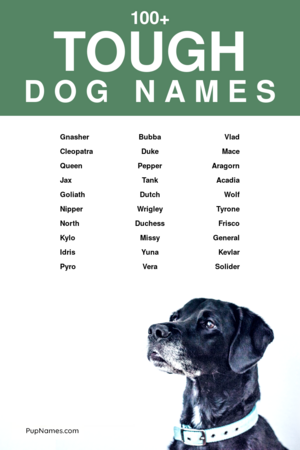 Let us know what you think of these tough dog names!