Show your Christian faith by choosing a biblical name for your dog. These biblical dog names are truly divine!

Staying on the biblical theme, these names mean holy or are in some way related to the word.

Staying on the biblical theme, these names mean saint or are in some way related to the word.

Deun
Meaning: saint
Saint
Meaning: Person acknowledged as holy or virtuous
Sancho
Meaning: Holy, Saint
Sinjin
Meaning: saint; holy man
Nevis
Meaning: one of the islands of Saint Christopher-Nevis
Dulia
Meaning: Veneration or respect paid to the saints and angels.
Santa
Meaning: As in Santa Claus, Father Christmas or Saint Nicholas.
Martina
Meaning: Feminine form of Martinus (see Martin). Saint Martina was a 3rd-century martyr who is one of the patron saints of Rome.
Halloween
Meaning: the evening before All Saints' Day; often devoted to pranks played by young people
Benedict
Meaning: From the Late Latin name Benedictus, which meant "blessed". Saint Benedict was an Italian monk who founded the Benedictines in the 6th century. After his time the name was common among Christians, being used by 16 popes. In England it did not come into use until the 12th century, at which point it became very popular. This name was also borne by the American general Benedict Arnold (1741-1801), who defected to Britain during the American Revolution.
James
Meaning: English form of the Late Latin name Iacomus, a variant of the Biblical Latin form Iacobus, from the Hebrew name Ya'aqov (see Jacob). This was the name of two apostles in the New Testament. The first was Saint James the Greater, the apostle John's brother, who was beheaded under Herod Agrippa in the Book of Acts. The second was James the Lesser, son of Alphaeus. Another James (known as James the Just) is also mentioned in the Bible as being the brother of Jesus.This name has been used in England since the 13th century, though it became more common in Scotland where it was borne by several kings. In the 17th century the Scottish king James VI inherited the English throne, becoming the first ruler of all Britain, and the name grew much more popular. In American name statistics (recorded since 1880) this name has never been out of the top 20, making it arguably the era's most consistently popular name. It was the top ranked name for boys in the United States from 1940 to 1952.Famous bearers include the English explorer Captain James Cook (1728-1779), the Scottish inventor James Watt (1736-1819), and the Irish novelist and poet James Joyce (1882-1941). This name has also been borne by six American presidents. A notable fictional bearer is the British spy James Bond, created by author Ian Fleming.
share

If there’s one book that’s full of powerful and timeless names that fit all types of dogs, it’s the Bible. God puts a lot of significance on names, ensuring that each one is full of meaning and story, so a list like the above is a great place to start looking.

The way you name a dog naturally affects how it is perceived by others, and how you are perceived too. So biblical dog names are ideal for those who are proud of their Christian faith, and want to celebrate it with their new puppy. If you need some help picking from one of the adorable religious and spiritual names listed above, let’s take a look together.

For male dogs, let’s start with Noah. This comforting name means “rest”, which your pup will be enjoying on a daily basis! And it refers to the story of Noah, who is most well-known for building an ark that preserved his family, as well as representatives of every land animal.

Asher is another great name for both boys and girls, but we usually hear it given to boys. The name is derived from the Hebrew word osher, meaning "happiness”, so it’s a really positive and uplifting name to give to a dog. And our final pick for boys is Samson, a strong masculine name with important religious connotations. Samson features in the Bible as a champion of the Israelites.

When it comes to female dogs, we understand why Chloe is such a huge favorite with new dog owners. Meaning “green herb”, this name symbolizes new life and growth while also having a strong natural sound to it. It works so well for small and large dogs alike!

For something more explicitly Christian, we also like Trinity. This has become an increasingly popular girls name since the beginning of the 21st century, and is a cute option for dogs. And finally, we can’t help but recommend Grace. The name represents charm, goodness and generosity – such are the very traits we commonly associated with our beloved pups.

As of February 2023, biblical dog names seem increasingly popular with new puppy owners. Our stats show that they are more fashionable than they were six months ago.

Someone from Washington, United States 🇺🇸 browsed a list of Cockapoo Names.
less than a minute ago

A dog whisperer from Virginia, United States 🇺🇸 browsed a list of Flower Dog Names.
less than a minute ago

Someone from Virginia, United States 🇺🇸 browsed a list of Hunting Dog Names.
less than a minute ago

A pup lover from Ohio, United States 🇺🇸 browsed a list of German Shorthaired Pointer Names.
less than a minute ago

A pup lover from Michigan, United States 🇺🇸 browsed a list of German Shorthaired Pointer Names.
less than a minute ago 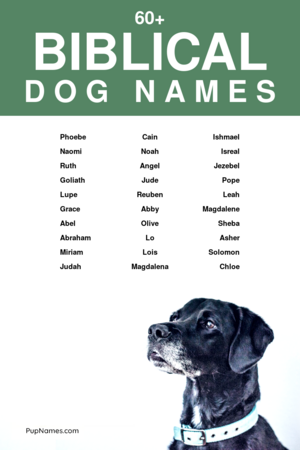 Let us know what you think of these biblical dog names!