Is your dog a real lazy bones? If they're happier on the couch than out for walkies, you might wanna consider this delightful list of lazy dog names.

Not all dogs are made for agility training and solving puzzles. Some just want to sniff poop and roll around in their own filth. These dopey dog names are great for less intelligent breeds.

Having a large breed is one thing, but having an outright fatso as a dog is something that needs recognizing. Look through these hilarious fat dog names for your chubby mutt!

Some people get a dog and are surprised and exhausted by its relentless energy. Others get one and can’t seem to convince their dog to leave the couch. There’s no doubt some dogs are just plain lazy, and it seems more common with breeds like English Bulldogs, Pugs and King Charles Spaniels.

If you’ve adopted a dog that shakes its head at the idea of a morning walk, that’s probably why you’ve landed on this list of lazy dog names. Even if your dog isn’t lazy, or if it’s too soon to figure that out, lazy dog names can be hilarious choices for fat, round dogs. Here are some of the names we love the most.

For male dogs, we can’t help but laugh at the name Slacker. It has an old-fashioned sound to it, even though we’ve rarely heard this name given to a dog, and it really sums up your pup’s opposition to doing anything physically active.

Laziness also invokes the image of the famous animated dog, Droopy. If you have a Bassett Hound, this is an obvious choice, but even for other breeds it really gives that drowsy, lazy vibe. We also love Couch as an under-the-radar option. While this name might seem too obvious, or too abstract, it pays homage to your pup’s favourite place and seems to be a hilariously ironic spin on the name Coach.

For female dogs, Pokey is a great choice for a lazy pup. At two syllables and ending in a vowel, it’s extremely suitable for dogs to recognize, and carries the meaning “annoyingly slow”. What could be more fitting than that for a couch potato?!

We also love Siesta, which perfectly encapsulates the afternoon nap, and brings an exotic touch if you’re not a native Spanish speaker. And for an unconventional choice, you could name your lazy girl Betty. We’ve got nothing against the name, but it’s just a reference to the Lazy Betty restaurant and the movie The Big Betty.

As of January 2023, lazy dog names seem increasingly popular with new puppy owners. Our stats show that they are more fashionable than they were six months ago.

Someone from Ohio, United States 🇺🇸 browsed a list of Spotted Dog Names.
less than a minute ago

Someone from Leinster, Ireland 🇮🇪 browsed a list of Musical Dog Names.
less than a minute ago

A pup lover from Virginia, United States 🇺🇸 browsed a list of Funny Dog Names.
1 minute ago
A dog whisperer from North West, Singapore 🇸🇬 searched for Christmas.
1 minute ago

Someone from California, United States 🇺🇸 browsed a list of Big Dog Names.
1 minute ago 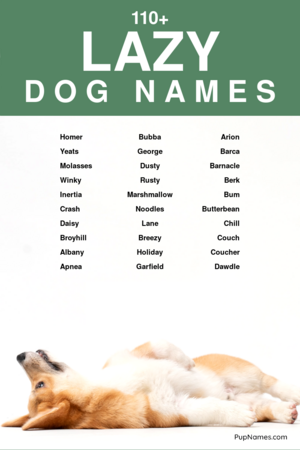 Let us know what you think of these lazy dog names!