There's nothing your pup loves more than a tasty morsel, so why not give them a classic food-inspired name? These food names will have you giggling!

Staying on the food theme, these names mean cake or are in some way related to the word.

Staying on the food theme, these names mean fruit or are in some way related to the word.

Staying on the food theme, these names mean vegetable or are in some way related to the word.

Dogs are sweet, so why not embrace that by giving them one of these dessert dog names? Perfect for small, cute breeds, and large, insatiable dogs alike.

As of October 2022, food dog names seem increasingly popular with new puppy owners. Our stats show that they are more fashionable than they were six months ago.

Bailey is the most popular name, having received more likes than any other in this list of food dog names.

A pup lover from Pennsylvania, United States 🇺🇸 browsed a list of Newfoundland Names.
less than a minute ago

Someone from Bogota D.C., Colombia 🇨🇴 browsed a list of Fluffy Dog Names.
1 minute ago

Someone from Chubut, Argentina 🇦🇷 browsed a list of Spiritual Dog Names.
1 minute ago 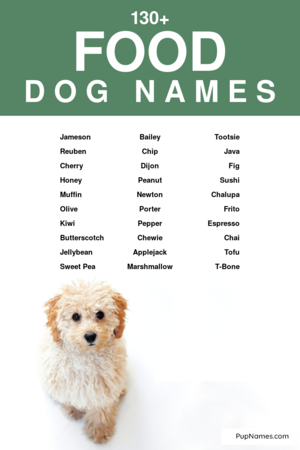 🇺🇸
Brad (Texas, United States)
You are missing one of the best dog names ever. Brisket.
June 12, 2022

Let us know what you think of these food dog names!