Looking forward to lots of love and affection from your pup? If you've adopted a living, breathing pillow for a dog, try this list of fuzzy, cuddly dog names.

Staying on the cuddly theme, these names mean soft or are in some way related to the word.

Your new dog guarantees years of hugs and cuddles for the both of you. Pay homage to their loving nature from day one with these beautiful affectionate dog names.

As of February 2023, cuddly dog names are trending down with new puppy owners. Our stats suggest that they are less fashionable than they were six months ago.

A pup lover from Chiapas, Mexico 🇲🇽 browsed a list of Spiritual Dog Names.
less than a minute ago

A pup lover from Ontario, Canada 🇨🇦 browsed a list of Unique Dog Names.
1 minute ago 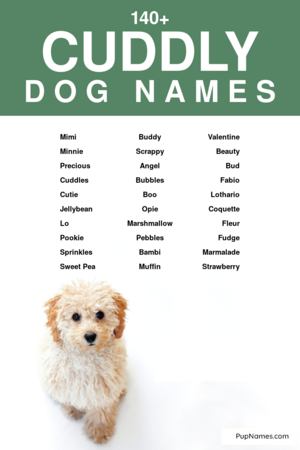 Let us know what you think of these cuddly dog names!