Dogs named Cinnamon tend to be good-natured, loyal, affectionate, and loving. This name is also associated with beauty, and companionship.

Cinnamon has more syllables than most dog names, but you can easily give your pup a nickname to shorten things. Cinnamon isn't one of the most common names, so your dog will certainly stand out. If you love the name, you should pick it!

Cinnamon is found in these categories:

Naming your dog Cinnamon is certainly a thing, but it's one of the more niche choices out there according to our data.

Get special treats for Cinnamon! 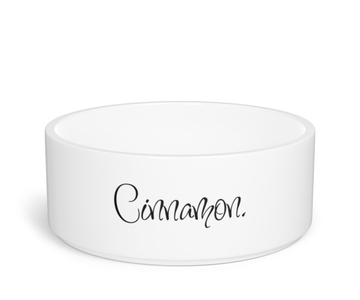 Caramel
having the color of caramel; of a moderate yellow-brown
Coconut
tall palm tree bearing coconuts as fruits; widely planted throughout the tropics
Cookie
Small files that hold a modest amount of data specific to a particular client and website.
Charlie
Free man
Chip
A word short for a chipset, or a splinter. Also the diminutive form of Charles.
Chocolate
a medium brown to dark-brown color
See more...

Got a dog named Cinnamon?

Let us know what you think of Cinnamon as a dog name!