Fall, or autumn, is the most beautiful season of all for many. These delightful fall dog names are fit for all kinds of dogs, but especially the redheads and brunettes out there!

Staying on the fall theme, these names mean leaves or are in some way related to the word.

The end of summertime is always bittersweet. Our days become shorter, and those late-night gatherings outdoors are sadly behind us. But with fall, a new type of beauty rolls in. Red leaves, wet grass and misty mornings bring their own autumnal charm – and many adorable dog names have been borne out of this beautiful transition of the seasons.

Fall dog names tend to focus on red, orange and brown colours, woody textures, and smokey smells. They suit darker-coloured or ginger dogs particularly well, but can work for any dog owner with an appreciation of nature’s beauty. It was extremely difficult to pick a few stand-out names from the above list, because they’re all just so good, but here are our autumnal tips.

For male dogs, our first recommendation is one of this year’s top names – Oakley. A strong, earthy name, Oakley somehow manages to sound traditional and modern at the same time. It works for both male and female dogs, but we've noticed it's a little more popular with boys.

To dig deep into the woody, earthy themes that come with fall, we also love Timber for boys. It lends itself to Tim as a nickname, and carries a strong, masculine sound. As an alternative, we think Smokey is a good name for boys. It’s a perfect name for black Labs, and also fits beautifully for shepherds.

For female dogs, let’s start with one of this year’s leading names. Hazel is a beautiful example of an earthy, natural-sounding dog name that also has a traditional, old-fashioned appeal. Hazel trees provide us with hazelnuts, which tend to reach ripeness at the beginning of fall.

As an alternative, there are two names that aptly represent the red foliage that becomes prevalent throughout the months of September and October. Amber is a fiery, deep name for a girl dog, and Ruby has a similar charm, with the added appeal of being a unique and popular gemstone.

As of February 2023, fall dog names are trending down with new puppy owners. Our stats suggest that they are less fashionable than they were six months ago.

Someone from Washington, United States 🇺🇸 browsed a list of Old English Sheepdog Names.
less than a minute ago

Someone from England, United Kingdom 🇬🇧 browsed a list of Gothic Dog Names.
less than a minute ago

A pup lover from Virginia, United States 🇺🇸 browsed a list of Portuguese Water Dog Names.
less than a minute ago 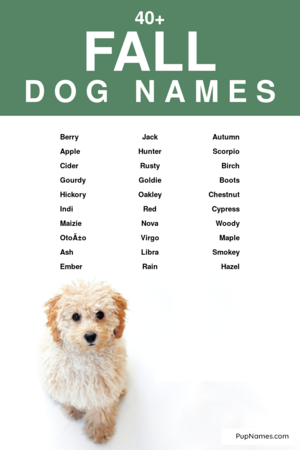 Let us know what you think of these fall dog names!