Winter is as beautiful a season as any other. If you love Christmas, snowfall and warm mugs of hot chocolate, you'll love this list of winter dog names.

Staying on the winter theme, these names mean snow or are in some way related to the word.

Staying on the winter theme, these names mean christmas or are in some way related to the word.

Winter is a time for many of us to wrap up warm and celebrate indoors. But the cold season also carries a distinctive type of beauty, ranging from snowy peaks to Christmas wreaths. Winter also reminds us of some of the most resilient dog breeds, like Siberian Huskies, Akitas and Mountain Dogs, all of which were bred for cold, mountainous climates.

If you’ve adopted a dog in the winter months, choosing a dog name inspired by winter can bring a lot of sentimental value to you and your pup. And it’s ever more fitting if you own one of the rugged breeds listed above. So grab a cup of hot chocolate and take a look through these glistening winter dog names!

For male dogs, a beautiful name to open with is Aspen. There’s just so much to love about this elegant and natural moniker. It refers to both the upscale ski resort town in Colorado, as well as the tree with delicate, heart-shaped leaves, making this a fantastic winter-inspired name for your pup.

If you’re feeling festive and want to give your boy a Christmas-inspired name, why not go with Dasher? This was one of Santa’s reindeer, the brother of Blitzen, Comet, and Cupid. Another name we love for boys is Kringle. This name refers to the Northern European variety of pretzel, and carries a wintry Scandinavian vibe.

For female dogs, we’re thinking outside of the box by recommending Tundra. This name refers to the vast Arctic plains where subsoil is permanently frozen, and it invokes feelings of serenity and purity that make it a perfect winter-inspired name for girls. Elsa is another name that makes us think of winter, mostly because of the princess in Walt Disney’s Frozen.

For something on the cuter side, you can’t go wrong with Mittens for a girl dog. We think this makes a fantastic name for fluffy dogs at the smaller end of the scale, such as white Pomeranians, Shih Tzus and Malteses.

As of February 2023, winter dog names seem increasingly popular with new puppy owners. Our stats show that they are more fashionable than they were six months ago.

Someone from Jalisco, Mexico 🇲🇽 browsed a list of Japanese Dog Names.
less than a minute ago

A pup lover from Texas, United States 🇺🇸 browsed a list of Funny Dog Names.
less than a minute ago

A dog whisperer from District of Columbia, United States 🇺🇸 browsed a list of Dessert Dog Names.
less than a minute ago

A dog whisperer from Metro Manila, Philippines 🇵🇭 browsed a list of Cute Dog Names.
less than a minute ago

Someone from Metro Manila, Philippines 🇵🇭 browsed a list of Cute Dog Names.
less than a minute ago 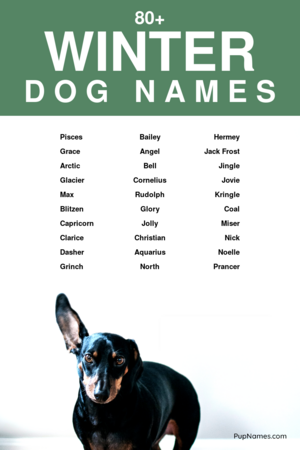 🇦🇺
Bronte (South Australia, Australia)
I love them think of more and I’ll be there to comment yay✌️
October 10, 2022

Let us know what you think of these winter dog names!