Dogs named King tend to be good-natured, loyal, affectionate, and loving. This name is also associated with intelligence, and companionship.

Naming your dog King may suggest that you have a strong sense of loyalty and respect for your pet, and that you want to give them a name that reflects their importance in your life.

King is a one-syllable dog name, making it short and snappy. King is a widely loved dog name for good reason. If you like it, go for it!

King is found in these categories:

King is one of the more popular dog names out there. According to our data, King outranks the great majority of names.

Get special treats for King! 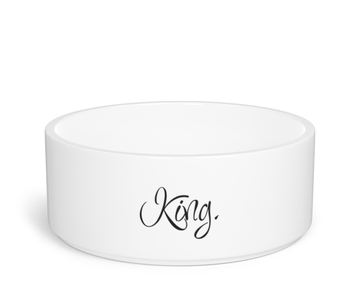 Clifford
From the ford by the cliff
George
Farmer, worker of the Earth
Max
Greatest
Rex
King
Butch
Bank and train robber.
Thor
God of lightning and thunder in norse mythology.
See more...

Got a dog named King?

Let us know what you think of King as a dog name!