Does your dog have a big mouth â or is it you?! These sassy dog names are perfect for a range of breeds, because they represent dogs that are bold, lively and full of spirit.

Some dogs were just born to be in charge. Pay tribute to your dog's bossy tendencies with these sharp and powerful bossy dog names!

As of February 2023, sassy dog names are trending down with new puppy owners. Our stats suggest that they are less fashionable than they were six months ago.

Someone from Virginia, United States 🇺🇸 browsed a list of French Dog Names.
less than a minute ago

Someone from England, United Kingdom 🇬🇧 browsed a list of French Dog Names.
less than a minute ago

A pup lover from Delaware, United States 🇺🇸 browsed a list of Sheepadoodle Names.
less than a minute ago

A pup lover from Tennessee, United States 🇺🇸 browsed a list of Sheepadoodle Names.
1 minute ago
Someone from North West, Singapore 🇸🇬 searched for Terrier.
1 minute ago 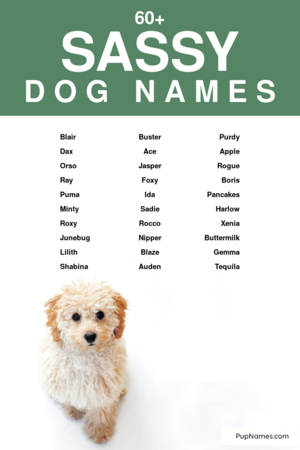 Let us know what you think of these sassy dog names!