Grumpy dog names can be hilarious, especially for small, sassy dogs, or sullen-looking pugs and bulldogs. Enjoy this great list of moody names.

As of October 2022, grumpy dog names seem increasingly popular with new puppy owners. Our stats show that they are more fashionable than they were six months ago.

Diva is the most popular name, having received more likes than any other in this list of grumpy dog names.

Someone from Provincia de Villa Clara, Cuba 🇨🇺 browsed a list of Alaskan Malamute Names.
less than a minute ago

Someone from Virginia, United States 🇺🇸 browsed a list of Gothic Dog Names.
2 minutes ago 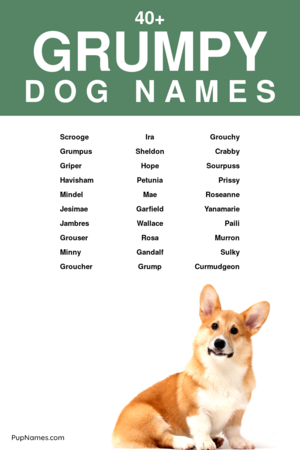 Let us know what you think of these grumpy dog names!