Getting a brown, deep red or gold-coloured doggo? These brown dog names will help you give your dog a name fit for its silky coat.

As of January 2023, brown dog names seem increasingly popular with new puppy owners. Our stats show that they are more fashionable than they were six months ago.

Someone from North West, Singapore 🇸🇬 searched for Lacy.
less than a minute ago

A dog whisperer from England, United Kingdom 🇬🇧 browsed a list of Bearded Collie Names.
less than a minute ago

A dog whisperer from Virginia, United States 🇺🇸 browsed a list of Winter Dog Names.
1 minute ago
A pup lover from North West, Singapore 🇸🇬 searched for Lacy.
1 minute ago

Someone from Western Australia, Australia 🇦🇺 browsed a list of Cute Dog Names.
1 minute ago 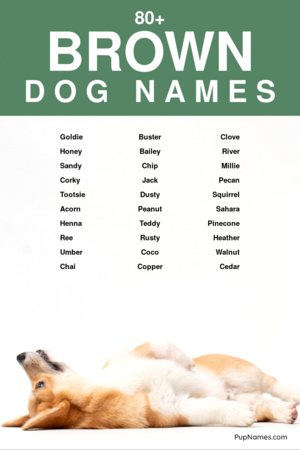 Let us know what you think of these brown dog names!