Cook. it is also used as a nickname for names long names that begin with 'co-.

Dogs named Coco tend to be strong-willed, good-natured, industrious, and affectionate. This name is also associated with intelligence, and companionship.

Coco has two syllables, which is highly recommended by dog trainers. The name also ends in a vowel sound, so it's easy for dogs to recognize. Coco is a widely loved dog name for good reason. If you like it, go for it!

Coco is found in these categories:

As you can see, Coco is one of the world's most popular dog names.

Get special treats for Coco! 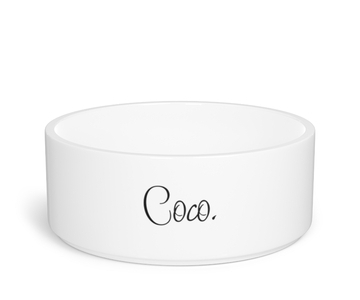 Got a dog named Coco?

🇺🇸
Coco (New York, United States)
I have a chitzu, it's white, I put coconut on it and my little boy started calling it x coconut
August 21, 2022 ◆ Translated

🇺🇸
Diana (Salem, MA)
Coco is a nice name for white dogs too! We have a 2-year-old Maltese named Coconut, and we call him Coco for short. We love his name and think it really suits him!
November 14, 2021

Let us know what you think of Coco as a dog name!