a liquor made from fermented mash of grain

Giving your dog an alcohol-inspired name could seem trashy, but the name Whiskey avoids this completely by carrying an image of class.

Whiskey is sipped, not devoured, and it's often associated with gentlemen and sophistication. The name raises a smile while still being elegant enough to take seriously.

Traits associated with the name Whiskey:

Dogs named Whiskey tend to be strong-willed, industrious, loving, and hard-working. This name is also associated with courage, friendship, and companionship.

Is Whiskey a good dog name?

Whiskey has two syllables, which is highly recommended by dog trainers. The name also ends in a vowel sound, so it's easy for dogs to recognize. Whiskey is a widely loved dog name for good reason. If you like it, go for it!

Whiskey is found in these categories:

Whiskey is one of the more popular dog names out there. According to our data, Whiskey outranks the great majority of names.

Get special treats for Whiskey! 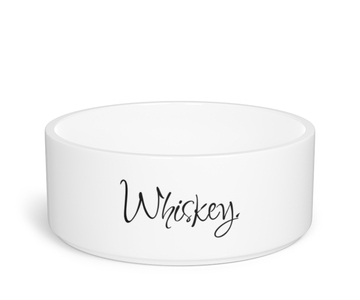 Got a dog named Whiskey?

Let us know what you think of Whiskey as a dog name!