Country makes us think of summer, the outdoors and good times. So even if you're not from the deep south, one of these country dog names might fit your pup like a glove!

Redneck dog names have a unique charm and can be a fun and silly way to show tribute to your country roots â or those of your pooch. City slickers look away now!

As of September 2022, country dog names seem increasingly popular with new puppy owners. Our stats show that they are more fashionable than they were six months ago.

Teddy is the most popular name, having received more likes than any other in this list of country dog names.

Someone from California, United States 🇺🇸 browsed a list of Preppy Dog Names.
1 minute ago

Someone from California, United States 🇺🇸 browsed a list of Nature Dog Names.
1 minute ago 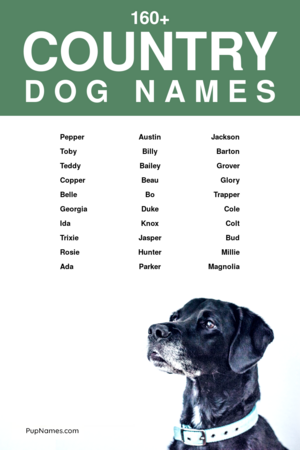 Let us know what you think of these country dog names!