Traits associated with the name Rosie:

Dogs named Rosie tend to be good-natured, industrious, and loving. This feminine name is also associated with intelligence, friendship, and companionship.

Is Rosie a good dog name?

Rosie has two syllables, which is highly recommended by dog trainers. The name also ends in a vowel sound, so it's easy for dogs to recognize. Rosie is a widely loved dog name for good reason. If you like it, go for it!

Rosie is found in these categories:

Rosie is one of the more popular dog names out there. According to our data, Rosie outranks the great majority of names.

Get special treats for Rosie! 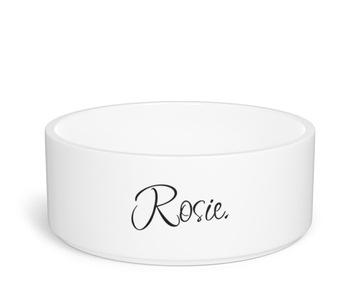 Ruby
An open-source general-purpose programming language.
Rose
Strength
Bella
Beautiful; short for Isabella.
Clara
A movie about an astronomer becomes obsessed with searching for life beyond earth.
Daisy
Day's eye. The petals of a daisy open during the day, revealing its yellow centers, and then close at night.
Dora
Gift
See more...

Got a dog named Rosie?

Let us know what you think of Rosie as a dog name!