Day's eye. The petals of a daisy open during the day, revealing its yellow centers, and then close at night.

Daisy is a time-honoured classic, having remained a popular moniker for puppy gals for decades.

It was once a nickname for Margaret, which also means 'pearl', so dogs named Daisy get the prestige of being both a beautiful flower and a valuable gem. What more could they want?!

We find this to be a delicate but cheerful name, great for the more agreeable female dogs – and those on the smaller side.

Traits associated with the name Daisy:

Dogs named Daisy tend to be strong-willed, good-natured, affectionate, and loving. This feminine name is also associated with intelligence, and companionship.

Is Daisy a good dog name?

Daisy has two syllables, which is highly recommended by dog trainers. The name also ends in a vowel sound, so it's easy for dogs to recognize. Daisy is a widely loved dog name for good reason. If you like it, go for it!

Daisy is found in these categories:

As you can see, Daisy is one of the world's most popular dog names.

Get special treats for Daisy! 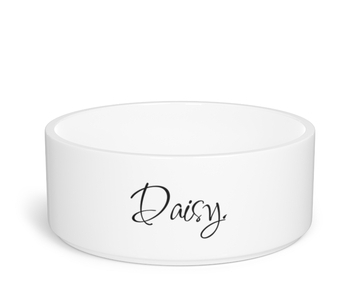 Lady
a woman of refinement
Stella
Star
Ivy
Climbing Vine Plant
Poppy
From The Flower
Bella
Beautiful; short for Isabella.
Dixie
From The South In The U.S.
See more...

Got a dog named Daisy?

Let us know what you think of Daisy as a dog name!