Behind every successful farm is at least one hard-working dog. Celebrate the relentless work ethic of your dog by giving it one of these traditional and charming farm dog names.

Some dogs just love having a job to do, and that's what makes them so adorable. Give your stick-carrying champ one of these fantastic working dog names.

You can't tame a dog's herding instinct, so why not embrace it by giving your puppy one of these herding dog names? Perfect for sheepdogs, corgis and cattle dogs.

Country makes us think of summer, the outdoors and good times. So even if you're not from the deep south, one of these country dog names might fit your pup like a glove!

As of February 2023, Farm Dog Names seem increasingly popular with new puppy owners. Our stats show that they are more fashionable than they were six months ago.

A pup lover from Florida, United States 🇺🇸 liked the name Anna.
less than a minute ago

A dog whisperer from California, United States 🇺🇸 browsed a list of Dog Names Starting With D.
1 minute ago 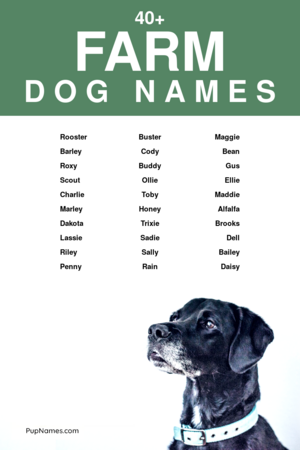 Let us know what you think of these Farm Dog Names!