We all love summer, don't we? The sun, sand and good times are best shared with our dogs, so these summer dog names are an instant win for all kinds of breeds and sizes.

Staying on the summer theme, these names mean sun or are in some way related to the word.

As of February 2023, summer dog names are trending down with new puppy owners. Our stats suggest that they are less fashionable than they were six months ago.

A pup lover from England, United Kingdom 🇬🇧 browsed a list of Old Fashioned Dog Names.
less than a minute ago

A dog whisperer from Ohio, United States 🇺🇸 browsed a list of Spiritual Dog Names.
less than a minute ago

A dog whisperer from Virginia, United States 🇺🇸 browsed a list of Shih Tzu Names.
less than a minute ago 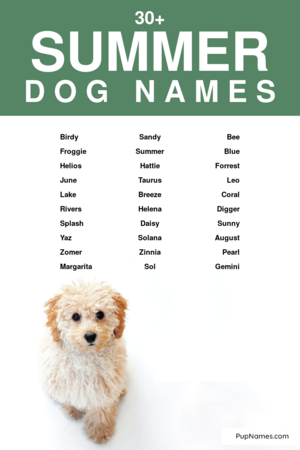 Let us know what you think of these summer dog names!