Give everyone a reason to pet your dog by giving them one of these friendly dog names. They'll make your pup extra approachable, even to non-believers!

Staying on the friendly theme, these names mean friend or are in some way related to the word.

Your new dog guarantees years of hugs and cuddles for the both of you. Pay homage to their loving nature from day one with these beautiful affectionate dog names.

As of October 2022, friendly dog names seem increasingly popular with new puppy owners. Our stats show that they are more fashionable than they were six months ago.

Buddy is the most popular name, having received more likes than any other in this list of friendly dog names.

A dog whisperer from British Columbia, Canada 🇨🇦 browsed a list of Doxiepoo Names.
1 minute ago

Someone from District of Columbia, United States 🇺🇸 browsed a list of Norfolk Terrier Names.
2 minutes ago

A dog whisperer from Victoria, Australia 🇦🇺 browsed a list of Bordoodle Names.
2 minutes ago 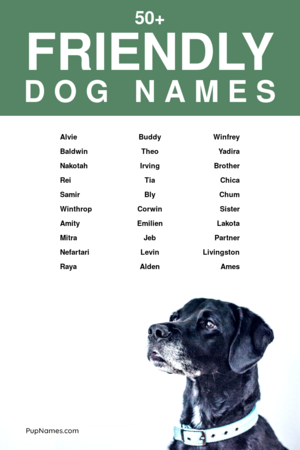 Let us know what you think of these friendly dog names!