Traits associated with the name Jeb:

Dogs named Jeb tend to be good-natured, and loving. This name is also associated with friendship, and companionship.

Is Jeb a good dog name?

Jeb is a one-syllable dog name, making it short and snappy. Jeb isn't one of the most common names, so your dog will certainly stand out. If you love the name, you should pick it!

Jeb is found in these categories:

Jeb is not a popular dog name. That's great if you like to stand out from the crowd!

Get special treats for Jeb! 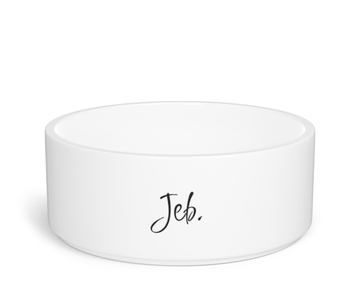 Pal
a close friend who accompanies his buddies in their activities
Pops
Shortened form of father.
Bly
Friendly.
Mate
British and Australian coloquialism for friend.
Tio
Uncle in Spanish, also used as a term of endearment for males.
Chico
Diminutive form of Francisco; means small, boy or child.
See more...

Got a dog named Jeb?

Let us know what you think of Jeb as a dog name!