If you want something chill or laid-back for your dog, these calm dog names will speak to you. Your dog might not be calm as a puppy, but one day the name will be suitable â we promise!

Staying on the calm theme, these names mean calm or are in some way related to the word.

Staying on the calm theme, these names mean peace or are in some way related to the word.

Lay the foundations for a well-behaved dog by giving them one of these mellow dog names. Your puppy might not calm down for a few years, but at least they'll have a fitting name when they do!

Nova
Meaning: New; a star that suddenly releases a huge burst of energy, temporarily becoming extraordinarily bright.
Juno
Meaning: The queen of the gods in roman mythology
Dakota
Meaning: The Allies
Dexter
Meaning: Right-handed, skilled
Bubba
Meaning: Nickname for a boy in the south of the US; a slow moving individual.
Bean
Meaning: The seed of one of several genera of the flowering plant family Fabaceae.
Chaos
Meaning: The void before the birth of the universe, titan god, total disorganization and confusion.
Eden
Meaning: Paradise
Hope
Meaning: Good
Stormy
Meaning: Impetuous Nature
Jax
Meaning: Son Of Jack
Odin
Meaning: The god of wisdom, poetry, death, divination and magic in norse mythology.

As of December 2022, calm dog names seem increasingly popular with new puppy owners. Our stats show that they are more fashionable than they were six months ago. 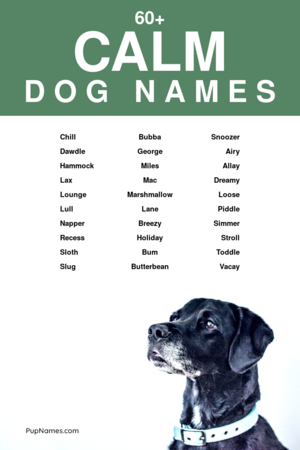 Let us know what you think of these calm dog names!