Superhero movies from Marvel and DC Comics are in fashion for good reason these days. Pay homage to your dog's super powers of chewing, licking and barking by picking one of these superhero dog names.

As of December 2022, superhero dog names seem increasingly popular with new puppy owners. Our stats show that they are more fashionable than they were six months ago.

Someone from District of Columbia, United States 🇺🇸 browsed a list of Swedish Vallhund Names.
less than a minute ago

A pup lover from Massachusetts, United States 🇺🇸 browsed a list of Chigi Names.
less than a minute ago
A dog whisperer from Queensland, Australia 🇦🇺 searched for Nacho.
1 minute ago

Someone from Santiago Metropolitan, Chile 🇨🇱 browsed a list of Funny Dog Names.
1 minute ago

Someone from Andalusia, Spain 🇪🇸 browsed a list of Celestial Dog Names.
1 minute ago 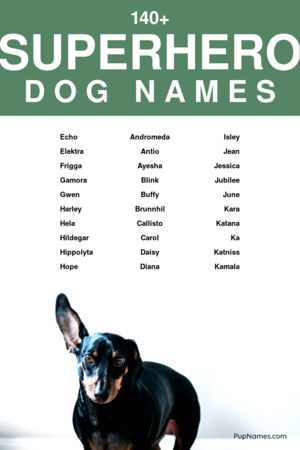 Let us know what you think of these superhero dog names!