We love the name Cosmo, because it speaks to the bigger picture, the universe, and puts all of our worries into perspective.

Cosmo is becoming popular with dog owners because of its spiritual and celestial nature. There's something ambitious but also very grounding about the name. And isn't that just what dogs do best – they bring us back down to earth.

Cosmo works for a wide variety of breeds, so don't hesitate to choose it if you like the name!

Dogs named Cosmo tend to be strong-willed, good-natured, loyal, and loving. This name is also associated with companionship, and empathy.

Cosmo has two syllables, which is highly recommended by dog trainers. The name also ends in a vowel sound, so it's easy for dogs to recognize. Cosmo is a widely loved dog name for good reason. If you like it, go for it!

Cosmo is found in these categories:

Cosmo is one of the more popular dog names out there. According to our data, Cosmo outranks the great majority of names.

Get special treats for Cosmo! 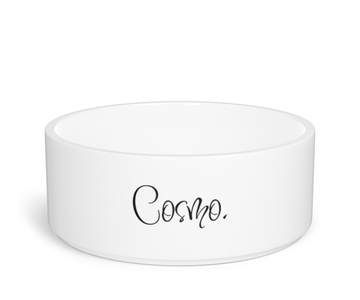 Got a dog named Cosmo?

🇺🇸
Terri (California, United States)
It's cute but, the name reminds me of Cosmo Kraemer on Seinfeld.. so it's not a name I'd puck
May 31, 2022

Let us know what you think of Cosmo as a dog name!