Love horror movies and Halloween? Or just want to scare the life out of your neighbours? These spooky dog names could be right up your (dark) alley!

As of February 2023, spooky dog names seem increasingly popular with new puppy owners. Our stats show that they are more fashionable than they were six months ago.

A pup lover from England, United Kingdom 🇬🇧 browsed a list of Dog Names Starting With T.
less than a minute ago

A dog whisperer from Virginia, United States 🇺🇸 browsed a list of Maremma Sheepdog Names.
less than a minute ago

Someone from Santiago Metropolitan, Chile 🇨🇱 browsed a list of Dog Names Starting With J.
less than a minute ago 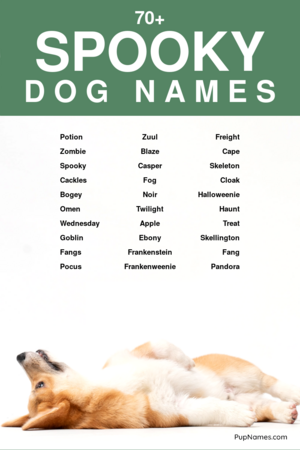 Let us know what you think of these spooky dog names!