Dogs don't have to be cute and fluffy creatures... they can also be as dark as your soul. Choose one of these gothic dog names for the ultimate alternative pup.

Love horror movies and Halloween? Or just want to scare the life out of your neighbours? These spooky dog names could be right up your (dark) alley!

Gothic culture has had a profound impact on art, music, fashion and architecture for decades, and has gone through multiple revivals. It represents the darker aspects of life, focusing boldly on magic, terror and gloom.

While these aren’t traits we commonly associate with dogs, giving your dog a gothic name shows a powerful, non-conformist personality, and also gives your pup a touch of humorous irony. You already know if you’re a fan of gothic culture, or consider yourself to be a goth – and if that’s the case, you’ll be naturally drawn to some of these unconventional but striking gothic dog names.

For male dogs, we love the simplicity and natural touch of the name Thorn. As much as we adore our furry friends, they can often be a thorn in our side, especially as puppies – and what better way to make fun of that than with this spiky dog name!

Another gorgeous name for boys is Onyx. This refers to the black gemstone, which already represents rarity and beauty, and we simply love the way it sounds. It would be a great option for black Labs and Border Collies, among other dark-coloured breeds. If you’re into pop culture, Dexter also ticks all the boxes. The popular television series is full of gothic symbols, like blood, torture chambers and mysterious disappearances.

For females, Zelda is a lovable choice for all kinds of reasons. Not only does it inspire thoughts of the famous Nintendo princess, but it also comes from the feminine name Griselda, which may originally have meant "dark battle”. This name isn’t limited to black dogs either.

For dogs on the smaller side, we think Pixie is adorably cute while paying homage to gothic magic. And for something less common, we love Selene. This refers to the Greek goddess of the moon, so it’s as dark or glittering as you want it to be.

As of February 2023, gothic dog names seem increasingly popular with new puppy owners. Our stats show that they are more fashionable than they were six months ago.

A pup lover from Andalusia, Spain 🇪🇸 browsed a list of Beautiful Dog Names.
less than a minute ago

A pup lover from Washington, United States 🇺🇸 browsed a list of English Toy Spaniel Names.
less than a minute ago

Someone from California, United States 🇺🇸 browsed a list of Dog Names Starting With P.
less than a minute ago

A dog whisperer from District of Columbia, United States 🇺🇸 browsed a list of French Dog Names.
less than a minute ago

Someone from Virginia, United States 🇺🇸 browsed a list of Dog Names Starting With P.
1 minute ago 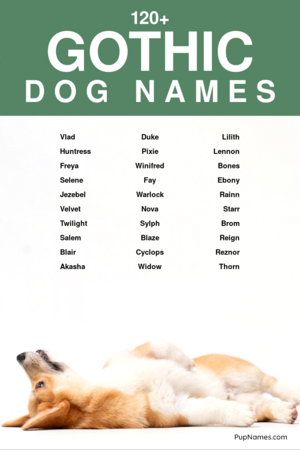 Let us know what you think of these gothic dog names!