Oh, Nova! There's just so much to love about this beautiful, astral name.

We've seen too many dog owners chicken out of naming their dog Nova, because it clashes with the word 'no' – and that's really such a shame.

This name represents the sudden burst of light emitted by a star, and that just lays the red carpet for a dog that's ready to make her mark on the world. Just call your dog Nova and find a different word to scold her with, okay?!

Traits associated with the name Nova:

Dogs named Nova tend to be good-natured, loyal, loving, and resilient. This name is also associated with intelligence, companionship, and empathy.

Is Nova a good dog name?

Nova has two syllables, which is highly recommended by dog trainers. The name also ends in a vowel sound, so it's easy for dogs to recognize. Nova is a widely loved dog name for good reason. If you like it, go for it!

Nova is found in these categories:

Nova is one of the more popular dog names out there. According to our data, Nova outranks the great majority of names.

Get special treats for Nova! 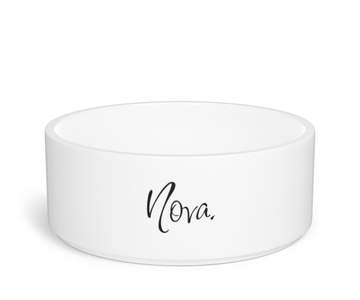 Got a dog named Nova?

Let us know what you think of Nova as a dog name!