Dog names inspired by flowers are appropriate for all kinds of dogs, big and small. If you love nature and flowers, here are some flower dog names to help you choose.

Staying on the flower theme, these names mean flower or are in some way related to the word.

Spring means new beginnings, and it's a beautiful time for the natural world. Set your pup up for life with one of these excellent spring dog names.

As of February 2023, flower dog names are trending down with new puppy owners. Our stats suggest that they are less fashionable than they were six months ago.

A dog whisperer from Departamento de San Salvador, El Salvador 🇸🇻 liked the name Muffin.
less than a minute ago

A dog whisperer from Washington, United States 🇺🇸 browsed a list of Cardigan Welsh Corgi Names.
less than a minute ago 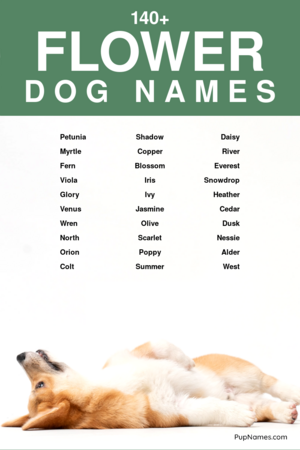 Let us know what you think of these flower dog names!