Sanskrit is the sacred language of Hinduism. These gorgeous Sanskrit dog names will be a hit with the spiritually awoken dog owners among us.

Fascinated by India? Give your new pup a cultural twist by choosing one of these beautiful Indian dog names

Sanskrit is a beautiful language, and a crucial part of the Hindu faith. It’s also been determined by linguists to be the language which emits the “most positive vibrations” and “most spiritually pure in nature”. So it’s no wonder that the spiritual dog owners among us would consider giving their pup a Sanskrit name.

The Sanskrit dog names in our list all have a gorgeous sound and powerful meaning. They also tend to be short, which is important to your dog’s ability to recognize the name when you call. But there are a few that really stand out to us as being great names for dogs.

Ajit is a fantastic name for males with two syllables, which makes it optimal for dogs to recognize. It means “invincible”, which is something we all wish that our dogs could be. And although we have to be prepared for our dogs to pass one day, this name really speaks to the resilience and strength that most dogs tend to possess.

Also a great choice for boy dogs, we love the name Bhumi. It means “soil” which gives your pup a connection to nature, and because it ends with a vowel sound it’s very easy for a dog to recognize. Another classic Sanskrit name would be Vijay, which means “victory”.

For female dogs, let’s start with Aruna. This beautiful name means “rising sun”, and can be traced back to Indian mythology, where the God Aruna is a charioteer who guides the sun across the sky.

A suitable name for energetic, athletic females would be Meghna, which means “lightning” and has a beautiful sound to it. And for something a bit more flexible but still rooted in Sanskrit origins, you could name your girl Tara. This elegant name symbolizes the light of the soul, and was the name of the wife of Shiva in Hindu mythology.

As of February 2023, sanskrit dog names seem increasingly popular with new puppy owners. Our stats show that they are more fashionable than they were six months ago.

A dog whisperer from Mexico City, Mexico 🇲🇽 browsed a list of Doberman Pinscher Names.
less than a minute ago

A dog whisperer from Virginia, United States 🇺🇸 browsed a list of Doberdor Names.
1 minute ago

Someone from Virginia, United States 🇺🇸 browsed a list of Icelandic Sheepdog Names.
1 minute ago 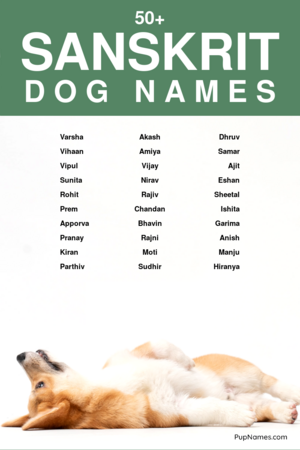 Let us know what you think of these sanskrit dog names!