Tilly is a soft-sounding name with a powerful meaning, which is why it suits a wide variety of female dogs.

It is usually a variant or diminutive of the German name Matilda, which means "might in battle". This old-fashioned name became less popular throughout the 20th century, but has made a revival over the past 20 years.

Roald Dahl's famous novel Matilda, and its accompanying movie, have helped to drive appeal of the name Tilly with dog owners.

Dogs named Tilly tend to be good-natured, and loving. This feminine name is also associated with intelligence, friendship, and companionship.

Tilly has two syllables, which is highly recommended by dog trainers. The name also ends in a vowel sound, so it's easy for dogs to recognize. Tilly is a widely loved dog name for good reason. If you like it, go for it!

Tilly is found in these categories:

Tilly is one of the more popular dog names out there. According to our data, Tilly outranks the great majority of names.

Get special treats for Tilly! 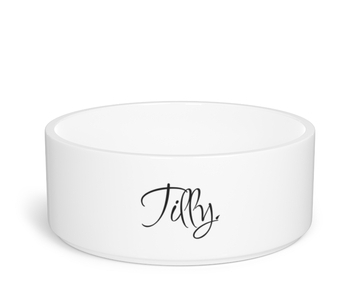 Got a dog named Tilly?

Let us know what you think of Tilly as a dog name!